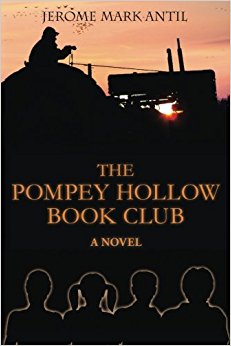 Life growing up in the shadows of WWII. Kids born in the '40s grew up fast. They had to. By the time they were five more than seventy million people were killed in the largest world war in the history of man. Jerry and his friends follow the example of the heros and sacrifice they witnessed in the War.  By the time they were ten, half their lives watched a world gone mad kill seventy million people.  Well, they heard it on radio - and saw it at the Saturday Morning picture show newsreels. A cross between Tom Sawyer and Hardy Boys, with one important twist.  The president of their club is a girl, Mary Crane.  Marty could throw a ball farrthest and could spell. The book is a treat to the young reader as a first chapter book - to fans of nostalgia with historical memories of the simpler live in rural America in 1949 - 1950. Watch a city boy stumble through the new world of family farms, and first kisses - and mystery

Mark Twain meets the Greatest Generation!The Pompey Hollow Book Club is the best kind of novel: charming, but with teeth. The narration exudes an experienced innocence with characters at once empathic and courageous. One might be tempted to call its setting a bygone era had this era not fashioned our world... this work moved me deeply.

It's a wonderful read. It reads like a living NORMAN ROCKWELL painting.