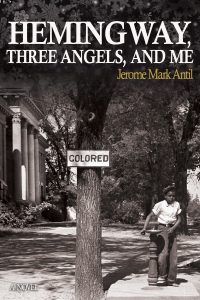 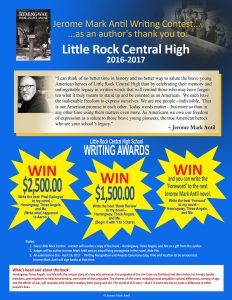 “Stand up and be accountable,” Jerome Mark Antil said, encouraging high school students with historic American heritage. “You can choose to make a difference in your lifetimes.”

Author Jerome Mark Antil and wife Pamela Berkin Antil walked the school’s halls in awe – realizing they were both alive when history was made at the very same school they were now welcomed into by a warm, gracious student body and a dedicated school staff.  The historic Little Rock Central High School entered the history books when President Eisenhower ordered troops to escort the nine into the school, defying a governor and integrating it for the first time –  near a half century ago.

“I remember as if it was yesterday seeing the news and the troops. I was a young teenager at the time,” says Antil.  “We’re sponsoring several writing contests in the very same school to remind the now culturally mixed student body to please consider they might owe their legacy – the heroes from all those many years ago – a thanks for being the early heroes that led to earning their right to be able to express themselves.  In today’s America more-so than in any recent times, speaking out is more than a right – it’s a responsibility, if a voice wants to be heard.”

In addition to the writing contest, Antil shipped 2,500 individual $17.95 copies of his 5 Star historic fiction, Hemingway, Three Angels, and Me – so that each student in the school may have one as his gift and the school library could have a supply as well.

Selected by Bookmasters to be featured in an upcoming LIBRARY JOURNAL Black History Month issue – Hemingway, Three Angels, and Me – the historic novel was seeded by young Antil’s 1953 visit to Little Rock, where he witnessed Jim Crow for the first time.  The novel – a fourth in the Pompey Hollow Book Club series was recently inspired and eventually brought to life in October 2016 with the advent of racial tensions repeated on a unnerving never ending basis in the media.  “I was so touched,” said Antil, “when I heard President Obama remind a press conference that he could remember a time as a senator, crossing a street and hearing car doors lock.  That vision alone brought my heart into a reality of how far we still have to go to my consciousness.”

“The African American culture needs a super hero of it’s own,” said Antil. “Captain America was invented to give America confidence at a time we felt we would be taken over by Hitler’s Germany.  Captain America saved our spirits, he lifted our confidence.  The African American culture – who I call Americans along with the rest of us – need a super hero within their culture – the culture they know better than anyone else.  A super hero who can identify with the real life African American experience in today’s America will give hope to the children that they can rise up and achieve whatever they set and work towards as a goal.  Not only will this super hero be their hero – and totally believable – it will become another hero for all of America as well.  It will give every child of any culture a reason to have a positive self image regardless of circumstance.  President Abraham Lincoln taught us you could grow up in a one room dirt-floored log cabin and become president. President Obama taught us that everyone of color could grow up to be President of the United States.  It’s important now that every African American child believe it – and more importantly believe they can too.”