Google Friar, author, philanthropist and children’s literacy advocate Jerome Mark Antil’s name and 91,300 results pop up give or take. That’s a phenomenal metric by virtually any measure, although it’s the first link leading to his author’s blog, which reads: “I like to write novels that read like scrapbooks” that packs the biggest wallop… 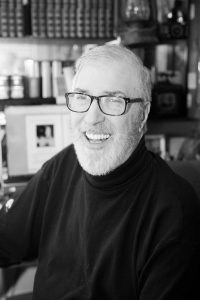 …and while such a bold statement is no exaggeration (he’s written ten books so far, including seven novels and three works of non-fiction), it’s also hardly happenstance this is the first thing you see when you type his name online. After all, Antil, who writes by the pen name “Jerome Mark Antil”, but goes by Jerry (hereto referred as for this article), knows a little something about marketing.For nearly 50 years, from the moment he set the basketball on the foul line in practice and walked away from a full five year college scholarship to become a writer, he enjoyed a prolific career writing and marketing in the business world, having conceived countless marketing plans, sales and training films, and commercials for a myriad of different companies.

So hot was Jerry in franchising and marketing in the ’60s, a failing national steakhouse chain promised him a Mercedes Benz just for flying for an interview to lure him to the away from his job from AMMCO Transmissions in Philadelphia, where he served as Marketing Director and had just appeared on the front page of The New York Times.
True to their word, the car was waiting for him when his plane landed in Dallas, where he and his wife Pamela still currently spend six-months out of the year in between their second home in Southampton. He also left with option for 12,000 shares of stock at $2 (it was selling at $49) and the title of VP of Marketing. Not bad for a college dropout. This five-year stint for the family steakhouse chain Bonanza – named after the classic western TV series Bonanza starring Lorne Greene, Dan Blocker and Michael Landon – that ran on NBC for an almost unprecedented fourteen years from 1959 until 1973.
Not only was Jerry instrumental in using the principal characters of “Ben”, “Hoss” and “Little Joe” Cartwright in ads to help promote the steakhouse, he was largely responsible for helping to turn it around. Near bankruptcy when he started in 1968 and with sales floundering at around $18 million annually by the time he left the same year the TV show went off the air, Bonanza was thriving with annual sales of over $300 million annually.
In the four decades since meanwhile, many other marketing projects followed, including writing the first marketing plan for startup Red Lobster Inns, owning the Good News Publishing Company that sold three million books in three years; taking TRAVELHOST magazine from forty markets into more than half of the millions of hotel rooms nationwide and heading up the Antil Study on tourism study at the Cornell University Graduate School. Until retiring a little over seven years ago, he was also a much sought-after lecturer, delivering speeches on the art of marketing at Cornell University, The Johnson School, St. Edwards University and Southern Methodist University.
Then in 2011, Jerry was inspired to do the thing he always felt he was destined to do most: write books, and becoming a New York Times bestselling author in the process. Having eschewed the traditional commercial publishing path and without the representation of a literary agent – instead, publishing and promoting his books entirely himself under his own imprint Little York Books – Jerry has also become something of a one-man cottage industry. 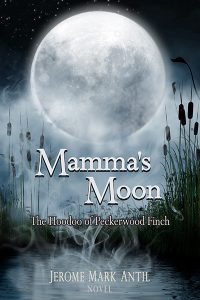 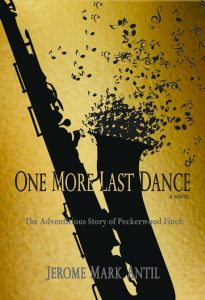 His Mamma’s Moon: The Hoodoo of Peckerwood Finch, taking place in Acadiana, the heart of Southern Louisiana region was released this past May. A sequel to his 2017 novel One More Last Dance, the dust jacket copy of Jerry’s latest effort describes the plot like this: “Mamma’s Moon does for Acadiana what Truman Capote did for Tiffany’s or Tennessee Williams did for streetcars. This is a novel about a lot of things, including sex, crime, life and death. But most of all, it’s a novel about hope and about love.”
His real-life story, which includes once being named a Bachelor of the Month by Cosmopolitan magazine is equally amazing. Originally from Cortland, New York, Jerry, as he describes it, was born “the seventh child of a seventh son of a seventh son.” Despite only having an eighth-grade education, his father Michael was a baker-turned-marketing wunderkind who was instrumental in the creation of the iconic baking brand Duncan Hines. “My dad was a genius, and I remember answering my phone as a kid and it would be Walt Disney calling because Disney wanted to get into the food business,” he recalls.
Another potent, if not portentous, childhood memory Jerry has is of his mother Mary predicting he’d someday become a writer almost from the moment he was born. His two first names even come from St. Jerome who was the Patron Saint of Librarians and Mark Twain.
“She said of all the children they had at the time, I was the most alert,” he says. “I stayed awake during the day and slept all night, and she said ‘a baby that alert ought to be a writer.’ She said this from the day I was born and I just had a knack.”
But during the nearly five decades before he actually became one, at least in the literary sense – including winning a full basketball scholarship to Xavier University in Cincinnati and dropping out in his sophomore year to follow in his father’s footsteps – both Jerry’s personal and professional lives took many unexpected twists worthy of their own page turner, and at times without much of an outline.
One of them was becoming a divorced father at the age of 46. In fact, it was his only daughter, Worley Antil Coco who made him promise that he would someday write a book to help other fathers and kids of divorce or separation cope when she was just 13-years-old.
The result was Handbook for Weekend Dads: and anytime grandparents, Jerry’s first self-published book done through CreateSpace that came out in 2010 and was an Amazon best-seller four years.

It is also his daughter, now 32, whom Jerry credits as being his creative catalyst, not only for encouraging him to write, but for pushing him to write novels. So following the successful release of Handbook for Weekend Dads, he then set out to fictionalize the bedtime stories he used to tell her about growing up during World War II that became the basis of his internationally award-winning Pompey Hollow Book Club series, the first of which was published through his Little York Books imprint in December of 2011.

Approaching 70 at the time, Jerry says he decided to go it alone without an agent or a brick and mortar publisher when an editor friend at Simon & Schuster told him it took almost two years for a book from a new author to hit stores.
“She said, ‘Do you want to wait that long?’”, he recalls of the conversation. I said, ‘I don’t’ and she said, ‘Publishing is 90 percent marketing and you know that better than anybody else.’ That’s when I sat with my wife, Pamela Berkin and said, ‘I’ve probably bought a hundred million dollars of media and printing in my career. I know it.”
It turned out to be the right decision because one month after its publication, in January 2012, Syracuse University named him writer of the year, and then the month after that he received a call that would permanently put him on the map as an author. It was from Diane Simowski, a top executive for Barnes and Noble calling from their headquarters here in Manhattan and informing him she wanted to carry his book in their stores nationwide.
“She said, ‘I just want to ask you one question – I just want to know if you plan to write any more books.’ I told her, ‘I could write a dozen more.’ And she said, ‘Good, because two people have put your book on my desk and this is the first time in thirty-five years I’ve ever called an author. We want you in our stores, if you’re going to write more. She then told me to be patient; it took sometimes six or seven years to get discovered. Diane found me a distributor and put me in Barnes and Noble and I sent her four-dozen roses when she retired.”

In the years since, Jerry – who joined the Friars two years ago and comes here three or four times a month whenever he’s in New York – hasn’t looked back, writing a book and a half each year. His latest project is following Hemingway’s lead of “the only writing is rewriting “and creating the Delphi Falls Trilogy, which continue to chronicle the stories of his youth growing up in the shadows of World War II. His boyhood home has just this year become a State Park – The Delphi Falls Park. 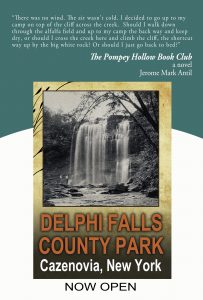 Markers point out his campsite, his treehouse. As one observer put it – “The Jerome Mark Antil boyhood home in Delphi Falls is seven miles from the Chittenango Falls where Baum’s Wizard of Oz was written – and seventy miles from where Mark Twain wrote Huckleberry Finn – it must be the water.”
Of course, being so prolific requires an enormous amount of discipline, which Jerry has down to a science also. Whether in Dallas or Southampton, he maintains the same schedule daily: writing from 6:30 in the morning until 2:30 in the afternoon, where he produces an average of 1,500 to 2,400 words a day, and then after some downtime with his wife and indulging in a glass of Sherry, putting his marketing hat on.
“I’m just doing what I was supposed to be doing all along, but I probably couldn’t have done it earlier because I wasn’t mature enough,” he says. “Now I can sit down and I’m like Ernest Hemingway. His best book, The Old Man and the Sea, was his last and it was almost like a short story. He wrote it in four or five weeks.” 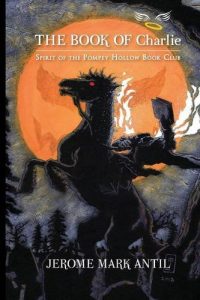