HomeUncategorized 2017 Media – Above the Law!

Mark 2017 down as a national ‘watershed’ moment in the United States of America.

It was when the media followed the example of our president’s weapon of public humiliation to bring someone, anyone he pointed it towards, down. Following his lead, the media took it upon its own to take sexual harassment complaints directly into the public court for trial and sentencing.  And the stock market insisted it be resolved quickly, one would think – so heads rolled – and will keep rolling.

First, it takes three to four hundred gross rating points (a measure of viewership) of television coverage into a single person’s brain for whatever is being broadcast to become an irrefutable fact in that person’s brain – regardless if it’s true or not. It’s called “Unaided Top-of-Mind Awareness”.   The media can do that to someone within hours.  And it’s there forever regardless of innocence or guilt.

This is truly a watershed moment for American culture and will continue – leaving the jury verdicts not to the ‘sexual harassment courts’ but to the ‘suit-for-slander’ or ‘defamation lawsuit’ courts – should they be a result.  It’s good news making the harassed only have to defend themselves if they lie.

Hugh Hefner is gone now…and with him so will his legacy be burned and buried in the trash heap he caused and nurtured to the post war All American innocent young men – aided by the invention of the ‘pill’ which seeded the largest sexual revolution the world has ever seen.  There are no excuses – there are reasons.  And just like Jim Crow – the Hugh Hefner insult to wholesomeness and natural law – will linger awhile – until, it seems, the plagued Baby Boomers who were victimized are all dead and gone. 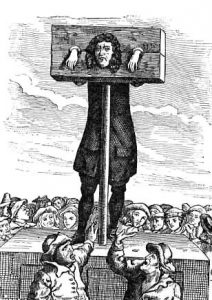 Second, the stockade was used centuries ago – for public humiliation – to set examples. The 2017 media has become the nation’s moral stockade.  Maybe it’s time has come. Maybe the public airwaves’s ‘shock’ talk pioneered by radio personalities like, Howard Stern, will go down in history as having begun the ruining of the country’s civil fiber.  But just maybe, in the end, as his own ‘gross rating points’ of bad behavior taught politicians and ultimately the media of its power – perhaps the high tech public stockades will save us and our civility after all…and foster a new beginning.